Smudge was a dog I didn’t want. When we agreed to foster her, though, I knew she was ours. No one wants a 143 lbs. untrained, unsound, seven-year-old malamute-Rottweiler cross–at least not anyone who should have one. She walked at a shuffle when she moved at all. I thought, she’s old (for a rotty), she’ll be an extra rug, and we’ll give her a home until she dies.

When we picked her up, she happily clambered in the car. In my house, she met my other dogs with interested sniffs and a few warning growls, and then walked to the door and looked at me expectantly. Her expression was clear; she’d had fun, but she was ready to go home.

We couldn’t take her home, of course. Instead, we took her on a walk around the neighborhood, and she was overcome with joy. She smelled everything that she came across with the utmost intensity. She made it about once around the block before she was breathing like a freight train, and when we got her home, she collapsed, exhausted, onto a dog bed.

When we picked up the leash the next morning to give her another walk, she couldn’t believe it. She snouted the leash. She had a ridiculous snout–too short and husky-like for her enormous rotty head. When Devin clipped on the leash, she snorfled, sounding rather like an extraordinarily happy dragon.

Despite knowing the dog market (such as it is), I made a lackluster effort to find her a home. I printed out posters and put them up in two locations. I offered her to several of my tutoring students. “Free potato dog,” I said. “You could have an enormous, blue-eyed potato in your house. It’ll be great.”

No one took me up on it. Just as well. I could not have been more wrong about her potato-ness.

We took her to the vet, who prescribed her an anti-inflammatory to keep her comfortable, and began a regimen of twice daily walks. Once Smudge twigged to the fact that walks would be a regular occurrence, she went to the leashes in the morning and evening, rumbling and snorfling. She made the best sounds. She had a chest like a barrel, and a wonderfully deep and resonant voice. 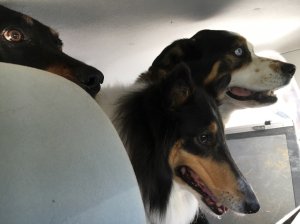 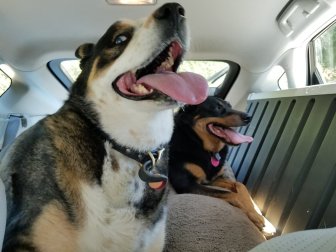 Gradually, the walks had to get longer because Smudge would not be tired afterward. She was an awful toy-hoarder (especially once Rhymer took one of her toys from under her nose and disemboweled it), so we bought a batch of horrible squeaky tennis balls that both dogs loved. Smudge did not approve of fetch. If you accepted one of her balls and threw it away from her, she’d snatch it up and run away to a corner to protect it. If, however, you threw the ball to her, she loved to play catch. She threw tennis balls to us in an impressive three-foot arc. Occasionally, she threw them at our very confused cats. If we failed to walk her enough, we’d get pelted by squeaky tennis balls all evening. 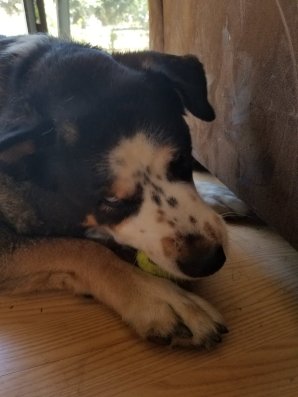 On her walks, Smudge took the concept of pack seriously. She could not stand to be split up from either people or dogs. If Rhymer and I lagged, every third step she’d glance over her shoulder. Eventually, if we were far enough, she’d stop and refuse to go on until we caught up.

Smudge was a dog of many, many opinions. As she became fitter, I decided that we could introduce some obedience. This seemed like an especially good idea with a dog who clearly hadn’t made the connection that doing things for people = way to get stuff. So, we began a regimen of “sit” before leash and walk.

Smudge knew what “sit” meant. However, she didn’t understand why, when we were about to do something amazing and awesome, we had to waste time with sitting. Unlike many dogs, who kind of shrug and go with it, Smudge stared at us with contempt that would make a cat jealous, snouted her leash, stared out the door, and otherwise did her level best to persuade us that we should stop fucking around and walk. Patience, though, is generally key to training. Once I knew she knew the command, I waited. And waited. And waited. After about five minutes of nonsense, with a little nudge of me walking into her space, Smudge would grudgingly and kind-of sit. Generally, things improve after this small victory. With Smudge, it was the same pattern for two weeks.

Finally, I looked at Devin and said, “Let’s go without her.” We took Rhymer and went out into the street, leaving the un-sitting Smudge alone in the house. We could see her big blue eyes staring at us in horror through the window until we walked out of sight.

Devin went back in, and Smudge’s butt was on the floor before she’d finished picking up the leash.

That, in a scene, was what training Smudge was like. She always thought through whether cooperation was in her best interest, and she didn’t give a damn what the humans thought. It was charming, in a way. I’ve interacted with a lot of dogs, and few of them are so utterly self-confident and independent. 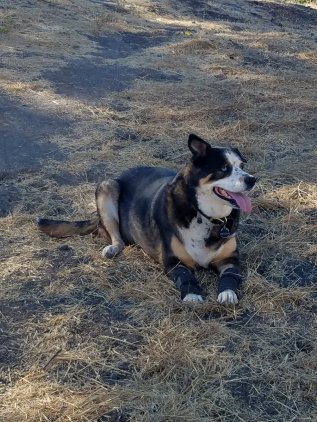 Although I’ve heard a lot of stories of how sled dogs decide to take a walk and don’t come back for days, Smudge was awfully attached to staying with her pack on leash, and this proved to be the case off-leash, too. We started hiking every day. Smudge loved nothing more than she loved adventure. In this way, too, she was an unusual dog; she adored novelty. Every time I took her to a new hiking trail, she bounced and sniffed and wiggled with delight.

Smudge just wanted to take it in. She loved to move, developing a ground-eating pace that took us up and down hills for miles. She checked in with me constantly, and her big, excited eyes and doggy grin of shared pleasure were impossible to resist. An hour and a half hike in the morning became mandatory for the peace of the household, and I started loving it as much as the dog. We took up the practice of finding as many new trails (or semi-trails) as possible, and she was game for all of it. I began to think, wow. This isn’t a dog we’ll have for just a year. 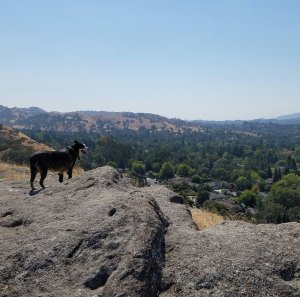 And several emergency vet trips later, over the last few days, I found out we’d have her for even less than that. We put her to sleep yesterday. She hated the vet–she’d climb into the waiting room chairs and try to climb into our laps–so I gave her a healthy dose of opiates, and Devin and I walked her for a few hours at Shell Ridge, which was green from the recent rain and rich with smells. She went to the car and to the vet exhausted and happy, and Devin and I both stayed with her until she was gone. For all her independent spirit, she shoved her head into my hand, and her paw into Devin’s lap and wouldn’t let us move without reproachful looks. “I think she’s secretly a needy dog,” Devin said.

She only had five months with us, and I miss her terribly. I didn’t want her, I thought, but I was wrong, and it was such a pleasure to be a partner to that terrifyingly intelligent soul, with all her intense joy and bottomless appetite for adventure. Goodbye, beautiful, remarkable girl.